According to Gallup, Inc., do you know the number one leadership behavior that affects morale and productivity the most? It’s not attitude. It’s not collaboration. It’s a lack of feedback. Providing candid feedback is an art, not a science. It takes some degree of finesse…but also common sense.

Candor is like a screwdriver—an incredibly useful tool that often involves a twist. When used in the right manner, it can help you construct and deconstruct any number of objects. But to get the benefits, you have to use it correctly. If you try to use a Phillips head screwdriver on one of those screws that looks like a star, it won’t fit.

Similarly, if you demonstrate 100 percent honesty without a common sense filter, the conversation or feedback you are offering is not going to be received very well. Instead of blatant or brazen honesty, slightly rotate your approach and apply candor as a form of sincere expression. In other words, do your best to say the right thing, to the right person, at the right time, for the right reason, and in the right way.

In any given work week, there is at least one conversation you’d rather not have; one conversation that you know won’t go well due to your or the other person’s emotions coming unglued; or one conversation that can overshadow the whole day, week or workplace because of the impact it could have with ongoing relationships. Why not dodge these uncomfortable conversations altogether?  What would be the benefit of learning to deal with these situations candidly?

First and foremost, those who engage in open and sincere dialogue, free from reservation or holding back what needs to be said—report higher levels of job satisfaction, confidence and performance results. By communicating clearly and openly about what’s on your mind, you can be more effective and productive versus spending countless hours and energy on worrying about what may happen next.

In an upcoming breakout session at the Society for Human Resource Management's (SHRM) NationalConvention & Exposition on Monday, 6/24/19 in Las Vegas, I will be sharing the six step process to achieving breakthrough relationships by maximizing candor and minimizing defensiveness by engaging in “CandidConversations that Drive Results.” Here are six results-focused steps, which if followed, will help you to transform your relationships, too. Each step is simple, but not necessarily easy.

1. Clearly identify purpose before engaging. Ask yourself these three questions:


3. Start with a statement that invites dialogue.


6. Keep your emotions in control.

Prior to the conversation:


At the end of the day, candor is a tool. And just like any tool, it can be used to create or destroy. You need to be aware of its potential dangers to mitigate them. Candor carries some risk, but if you apply common sense when using it, you will likely build your relationships stronger than ever before.

Are You Smooth or Strong?

Would your organization ever promote smoking or other bad practices that are scientifically linked to health problems? It’s not too likely. Because if it did, they’d be undermining all of the arduous efforts to enhance employee health and well-being.

It’s time to equate toxic attitudes to smoking. They not only damage the health of your employees, but horrible attitudes also directly affect your workplace culture and your organization’s bottom line.


You say it’s a beautiful day, she tells you why it’s not. You tell him about your new idea, he tells you why it won’t work. You proudly share a recent work success, and she replies with, “Yeah, but what about…?” I refer to these toxins as “Debbie Downers,” “Cynical Sams,” “Pessimistic Pauls,” “Negative Nancys,” or “Gloomy Glens.” They spew venom to anyone and everyone who will listen.

Cutting ties with “Nathan Naysayer” is much easier said than done. Even when bosses need to sever ties, employees often hope they take the necessary action, so the morale of the team doesn’t take a bigger hit. Yet, according to a survey featured on Fortune.com, fewer than half of managers said they would fire someone for damaging team morale. Interestingly, 88 percent of employees would. Team members understand the direct impact of these destructive types. They personally experience their high-performing, fun and collaborative team morph into something unrecognizable—a team they don’t want to be a part of any longer. Sadly, it’s often too late when management finally realizes the extent of the damage.

Regardless of your role, putting distance between you and harmful naysayers is essential for healthy, meaningful and respectful relationships to prosper. By making small, purposeful changes in your behavior with negative influencers, you can better control your own thoughts and actions, and more positively influence those of your team. If you know you ought to put distance between you and “the Nathans,” consider trying one or more of these strong ideas:

Change your routine. Instead of sitting through lunch with someone who whines and complains about her troubles, critiques mutual friends, and sits and pouts, choose to do something different with that time. Go for a walk, eat with someone else, or spend time reading. If she questions your behavior change, engage in candid dialogue with her. The exchange may influence a behavior change from her, too, or at the very least, you will more easily be able to enjoy lunchtime without facing unwanted whining and negativity.

Keep interactions short. If you have to engage with a pessimistic individual, keep the interactions short and focused on the desired outcome. Instead of empathizing as she rambles on about her mountainous workload or frustrating spouse, listen for a few minutes, and then explain that you really need to cut this conversation short due to another commitment—the commitment you made to yourself to limit interactions with this person.

Maintain perspective. There are reasons people behave the way they do. Sometimes the reasons are clear, while other times it’s murky. Perhaps the bothersome naysayer you wish to avoid is facing self-esteem issues, ongoing job performance errors, money problems, health concerns, or something completely different. We each behave in our own way when we have concerns that are weighing heavily on us. Understanding that there may be a deeper cause for the pessimistic persona wouldn’t cause me to excuse it, but I could more easily maintain a greater sense of perspective with it.

Optimistically oppose. If you’re stuck in a situation where everything that is flowing out of “Gloomy Glen” is anti-positive, tentatively articulate kind, opposing statements. For example, if he says his food sucks, combat that with, “My food is pretty good. Perhaps, you could try a different entrée?” Or if he says the (mutual) boss is a pain to work for, optimistically oppose by saying, “I used to think of her the same way. Then I decided to focus on the positive difference she has made to our team, and that helps me view her in a different light.” If this tactic doesn’t influence a more positive tone right away, hopefully you have given this individual a little more to think about. At the very least, “Gloomy Glens” tend to move on to others when what they are getting from you isn’t satisfying their mantra.

Almost all of us have dealt—or are still dealing—with an annoyingly negative co-worker or an unbearable pessimistic boss. Avoid shouting, “Take a shower! Your attitude stinks!” Instead, consider Albert Einstein’s words of wisdom: “Weakness of attitude becomes weakness of character.”

Rather than being a smooth character, choose to demonstrate strong character and color any situation with a positive attitude. 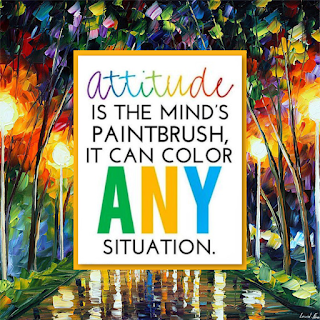