Let Go and "Kick 'em Out of the Nest" 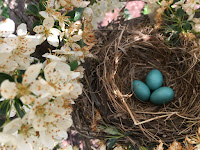 “Holding on” is about bargaining, primarily with yourself. For example, let’s say Ben dislikes his boss; they don’t seem to see eye-to-eye on most things. Ben tells himself that if he can just hang on until the end of the year, he knows he’ll get that promotion and then he won’t have to deal with her anymore. Bargaining, in this context, allows you to wish—but sadly strips you of the ability to make the wish come true.

In contrast, “letting go” is about facing, and then dealing with, the reality or truth you’re confronted with. It’s about kicking that “if/then” language to the curb, and instead, stepping up to carefully consider your options, making the best decision, and then taking action by following through with that choice.

In addition to our work lives, we face this same dilemma in our personal lives.

Someone very close to me recently started a new job, after the last two were short stints and unfulfilling. I caught myself saying, “If I am able to set him up for success by purchasing these necessary tools for him, then he will be able to perform as expected, he’ll feel confident and happy in his new role, and this opportunity will become the career he has always wanted.” Writing my thoughts down on paper actually made me realize the “if/then” language I had succumb to. You can help set others up for success and that is an admirable gesture. But when you expect others to behave in a certain way because of your actions—similar to my situation—you may be attempting to somewhat control others using an “if/then” mindset.

So in my personal scenario, I decided to not give the new tools to this young tradesman; instead, I offered to purchase and provide the brand new set of tools to him now along with a one-year promissory note, outlining the expectation that the loan will be paid off in one year. Once the note is satisfied, he becomes the official proud owner of the shiny power drills, saws and screwdrivers. He happily signed the note. He was provided with necessary items to begin his new job. He has a responsibility, though, to pay for them. Yet, the tools alone will not determine his fate. It is up to him to choose to arrive at the scheduled start time. It is up to him to pay close attention to the direction provided and learn how things need to be done. It is up to him to utilize his newly-acquired skill-set and perform his best. 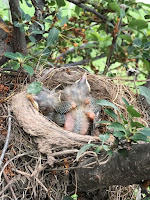 Letting go is about offering assistance and then knowing when to step aside to allow others to navigate on their own.

Similar to momma birds caring for their young and then literally choosing to “kick ‘em out of the nest,” letting go is an important part of helping others grow. Whether it’s with a colleague at work or a family member at home, the art of letting go helps prepare others for not only this next step, but the many more that will follow in the future.

(The pictures were taken from our flowering crab apple tree in our yard.)