When is Enough, Enough?

This morning I heard a radio broadcaster say that she felt sorry for Tom Brady. Even though he won five Super Bowl rings as a Patriot already, she felt bad for him that he and his team didn’t walk away with the Lombardi Trophy yesterday. I found that comment very interesting. I could see if she was a huge Patriots fan, but she wasn’t. That comment got me thinking…when is enough, enough?

Consider this. If you won or earned one million dollars, would you take risks and work hard to increase that number to five million? Suppose you had five million—would you consider yourself wealthy enough to relax and pursue non-monetary goals, or would you push onward to reach ten million dollars?

When is enough, enough?

This is a question I’ve pondered throughout my life. It’s not a simple question, but one I have found important to allow me to re-focus and bring greater awareness to true meaning in my life. And even though this is a very personal question, it’s true that you pay a price to continue onward and upward, and you pay a price to stop.

As I contemplated “enough”, I thought through several examples:


So the question I began to ask myself was, “Does having more than two handbags offer me more happiness?” The answer for me is, “No, not really.” And does having more than two take more time out of my day to swap handbags and transfer everything from one to another? Yes, it certainly does. So it is possible to have too much of a good thing? Can less actually be better than more? Once again, the answer for me was, “Yes.”

I then considered, at what point does more money become meaningless in terms of quality of my life?

As a fairly new resident of Colorado, moving to this state from Wisconsin was a huge shock in terms of cost of living. One example is our home, which was about double the price than in WI for similar quality and square footage. I find myself saying, “If we had a little extra money, we could…” But I’m not sure that is true.

My sister recently visited us from out of state. We had a fabulous time hanging out and experiencing new places together, one being Red Rocks Amphitheater & Park. I’ve always wanted to see this geological marvel with a breath-taking panoramic view of Denver and beyond. She recommended eating at the famous restaurant located onsite called Ship Rock Grille. What an amazing experience, which I can describe as incredible awe. 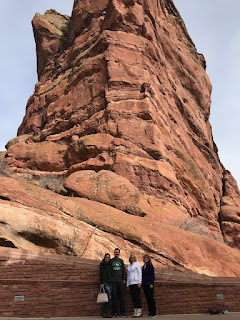 As I reflect back on the adventure to Red Rocks, it clearly didn’t take a lot of money (gas and lunch) to engage in an incredible experience, but it did take some time and descent health to maneuver around. Likewise, enjoying the company of my sister, niece and nephew-in-law didn’t cost me much money while they were here, but it did require some time to spend with them, cultivating and growing those relationships—which I very much enjoyed doing and personally value tremendously.

So then I got to thinking, “Can more money actually lead to less happiness and perhaps even less freedom?”

Look at famous football players, for instance. They have the ability to buy what they want, but they don’t have the freedom to go where they want without becoming targets of unwanted attention. And when they can’t take their families out to a local venue for some fun because of being bothered for autographs, not only is their freedom limited, but so in the quality of their life experiences.

So the message I share today is that true happiness in life likely doesn’t come from having more; instead, it comes from nurturing what you already have deeper and more meaningfully. And just as those underdog Eagles rose above for the pinnacle football victory yesterday—they surely made a lot of money because of winning—but the experience for each of them as first-time champions will likely be the memory they fondly recall and share heartfelt stories about for many years to come.